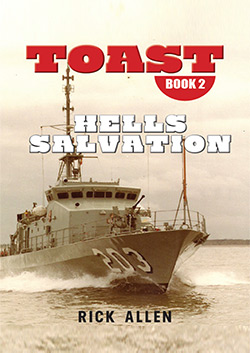 After the Nuclear Holocaust, Dick, Patch and their close friends are fighting for their lives against unbelievable odds. The only inhabitable places left are Taswegia and New Haka.

Two ex-Navy Clearance Divers, an ex-Army Sapper and their partners fight to reach a place where they can make contact with others who are hopefully still alive, and who can help them rid their land of the Alliance!

A danger-fraught week of travel began, with Sarge, Patch, April and Annie on horseback, and Dick and Jack travelling by road and sea.

Along the way both groups encountered Alliance troops more than once, only narrowly escaping with their lives; eventually managing to reach the relative safety of Hells Beach, where they set up camp, thinking they were well out of reach of the Alliance at last.

However, their reprieve from danger was brief; awakening one morning to find that a Freemantle Class Patrol Boat had appeared at the entrance to the bay.

Realising they were about to be discovered, they worked together to overpower the Alliance crew and take control of the patrol boat.

However, the skirmish left one of their number seriously injured, and in urgent need of medical help...